Melanoma - Not a Respector of Persons

Last night, while updating this blog, I was surprised to receive an anonymous comment that made the claim that "melanoma is a white person's only disease" followed by a statement that read "melanoma is white person's curse [...] to call your organization 'Cancer Crusaders' is to be a hypocrite because you only care about cancers that affect white people."

First, please allow me to ease this person's concerns about whether or not I care about all cancers; I care, very deeply, about ALL cancers. My mother - my only parent - was taken from me as a teenager by breast cancer. Additionally, I have had several other family members suffer cancer - prostate cancer, lung cancer, uterine cancer, and melanoma, as well. My dear friend (and co-founder) lost her brother to complications associated with malignant melanoma. He was just 21-years-old. My best friend lost her grandmother to cancer. Nearly every one I know has been touched by cancer, including melanoma, in some form.

Secondly, and most importantly, please allow me to me plainly state that MELANOMA IS NOT A RESPECTOR OF PERSONS. Everyone is at risk for melanoma -- the deadliest form of skin cancer. While it is true that individuals with fair or lighter skin are at the highest risk, ultraviolet radiation is a known carcinogen that affects all biological forms of life, according to NASA and the World Health Organization. In other words, melanoma can touch anyone's life regardless of skin color, national origin, race, creed, or gender.

Contrary to popular belief Bob Marley did not die of a drug overdose; rather succumbed to malignant melanoma which spread into his lungs and brain. This factoid might surprise a few readers; however, this piece of information should actually bring the seriousness of this disease into a sharper, more stark perspective. Bob Marley’s battle with melanoma is a noteworthy case-and-point.


Initially, Marley mistook the unrelenting - and growing - sore on his right big toe for an old soccer injury. The supposed wound, which was originally found in July 1977, posed problematic after months of lingering ulceration. It was only when the sore began to grow, aggressively, under his toenail and thus interfered with Marley's dancing, that he sought medical advice. It was then that the correct diagnosis of malignant melanoma was made. Marley was advised to get his toe amputated, but he refused because of deeply held religious beliefs (he was Rastafarian). He also was concerned about the impact such an operation would have on his performing. He felt that amputation “would profoundly affect his career at a time when greater success was close at hand” according to biographers. Sadly, Bob Marley’s melanoma spread to his brain, his lungs and his stomach. While on tour in the summer of 1980, while trying to break into the U.S. market, Marley collapsed jogging in Central Park. Marley did seek other alternative advice regarding his melanoma diagnosis, but it was to no avail. He died a year later on May 11, 1981 at the age of 36 while at the peak of his music career. If we learn anything from Bob Marley’s story, it is that no one is exempt from a melanoma diagnosis.

Moreover, we learn that taking action on anything of concern is imperative. Do not be afraid to listen to your body nor be afraid to open your mouth; ask questions and seek help from your dermatologist.
After all, you are your own best advocate. Bob Marley dismissed an unrelenting sore on his toe as a stubborn soccer injury, for which he paid the ultimate price—his life.

That said, I implore each of you - especially the young adults in their 20s - to take proper precautions against a future melanoma diagnosis. Perform your monthly self-skin exams; visit your dermatologist for a full-body skin exam once-a-year; properly apply an effective broad-spectrum SPF 30 sunscreen every day; avoid tanning beds, and spread the message on to your friends and peers.


* Note: More about this can be found in ONLY SKIN DEEP? An Essential Guide to Effective Skin Cancer Programs and Resources. Pick up a copy today and support the cause. In this book, you will find a listing of melanoma foundations throughout the U.S., and read about others touched by melanoma.

PS: May I also suggest my friend Chris' Website devoted to malignant melanoma for more information about this deadly, but preventable disease.

PPS: If you have any questions about skin cancer, The Cancer Crusaders Organization, my book (or upcoming book), about the Skin Cancer Awareness ribbon, or would simply like to share your story please feel free to email me.
Posted by Danielle at 2:38 PM

Danielle,
I was so happy to be able to access your blog. Your posts are so interesting. Thank you so much for taking the time to inform others. I so appreciate all of the sweet comments that you leave on our blog. You are such a kind, sincere, wonderful individual!
Thank you for being the person you are, and for making a difference in so many lives!

You and John are two of the sweetest people on the planet.


Thanks so much for your uplifting and encouraging comment! Moreover, THANK YOU for raising a SunSavvy kid! Ruby is so lucky to have parents who are so diligent about protecting her from the sun (especially the Arizona sun!)

Thanks again, Nicole. And be sure to let John know that The Cancer Crusaders Organization wouldn't be where it is today if it weren't for all his help and support.

Sending my love, well-wishes, friendship, and prayers to you all. And don't forget to keep cute lil' Ruby lathered in Blue Lizard sunscreen, and sporting wide-brimmed hats/sun protective clothes.

It is true Melanoma in black or dark skined people is rare, but it does occur and it WILL KILL those with dark skin tones just as easily as white skin tones.

I did a Melanoma presentation to my classmates and began by going around the room pointing out eye color, hair color and skin tones. Amoung the whiteskinned, blue eyed, and red haired women who were in the room there were also 3 black women. After I finished my walk around I aksed "who here is a Melanoma candidate." Two of the whiote women raised their hands and none of the black women did.

Too many misconceptions regarding this very aggressive cancer are out there. An aggressive cancer whic is soooo preventable. We need to keep pounding the pavements with the education to help prevent this from killing ove 8000 people per year in this country alone. You are doing great things and I am honored to be called a friend of yours!
I know you will be SunSavvy! :)

Thank you, Chris, for your comment and for all that you're doing to educate EVERYONE about melanoma skin cancer prevention.

I recently received an essay about the dangers of tanning and melanoma awareness from a young woman from Nigeria.

She must have been reading my mind, because here is another example of how melanoma can touch ANYONE regardless of their skin color, race, ethnicity, or background.

Again, melanoma is not a respecter of persons.

Again, we ALL must protect ourselves by wearing a SPF 15+ sunscreen everyday (all year round), going to the dermatologist, and avoiding tanning beds.

Thanks, again, Chris and THANK YOU to Hassan from Nigeria for your essay on melanoma skin cancer.

Thank you so much for sharing your blog and spreading awareness. I was diagnosed with Melanoma two years ago when I was 35. Thankfully mine was caught before it spread to my lymph nodes. I have 3 scars to remind me daily to protect my family from the sun (one huge one from the melanoma and two smaller ones from the lymph node biopsies). I have made many new friends (online mostly) who have had similar experiences as well as those who are in the fight for their lives. Support and awareness are so important and I applaud everyone who shares their stories and spreads the word!

Thank you so much for sharing your blog. I was diagnosed with Melanoma 2 years ago when I was 35. I thank God every day that it was caught before it spread. I have 3 scars to remind me to protect my family (and myself) with sunscreen every day. One from the melanoma and two from lymph node biopsies. I have made many friends (mostly online) who have had an experience similar to mine as well as those who are fighting for their lives. No matter what stage, the diagnosis can be overwhelming (it was for me!). Support and awareness are so important and I appreciate everyone who has been kind enough to share their personal stories.

Excellent blog! I touched on this very topic in my blog (http://blackispink.blogspot.com) a few weeks ago. What many people don't realize is that melanoma is harder to detect in people of darker color because it doesn't show up as clearly as on lighter skin. As a result, first detection on lighter skinned folks results in well above a 90% survival rate. But first detection in those with darker skin have about a 77% survival rate..merely because the melanoma is first detected at a more advanced stage.
Continue the great work on your blog and keep spreading the word!

"Only mad dogs and Englishmen go out in the noon day sun [unprotected]." - Rudyard Kipling

Skin cancer is not only the world's most common cancer, but its also the most preventable? In fact, 90-95% of skin cancers are preventable with proper year-round protection from UV rays. Surf this blog to find out how to protect yourself - and your loved ones - from this highly preventable form of cancer!

The world's most common cancer in any language 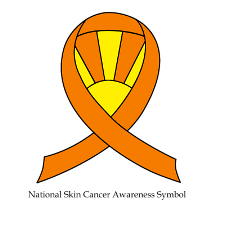 Introducing the new, official ribbon symbol for Skin Cancer Awareness. Created by Natalie Johnson of Utah, and presented to the American Academy of Dermatology in 2004, this ribbon represents how 90%+ of skin cancers are attributable to over-exposure to UV rays. Helps us eradicate the world's most common and PREVENTABLE cancer by clicking on to: http://cafepress.com/SkinCancerRibbo. Thank you for your support!

Danielle is the co-founder and president of a three-time nationally award-winning nonprofit - The Cancer Crusaders Organization. She's the former host and co-producer of the "Conversations with Cancer" radio talk show, and the author ONLY SKIN DEEP? An Essential Guide to Effective Skin Cancer Programs and Resources which was published in 2007 and is currently in its second revision (release date TBA). Her skin cancer curricula have garnered awards from organizations such as the American Academy of Dermatology. She's also helped push legislation on behalf of sun safety in Utah. For more information, please send an email to: acancerfreeutah@gmail.com.